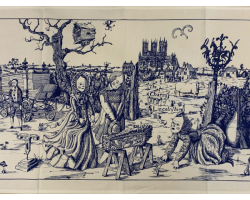 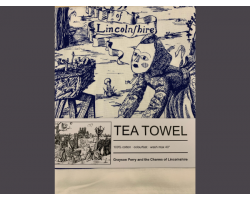 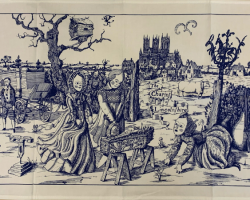 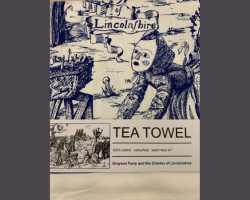 EXCLUSIVE TO THE COLLECTION

Grayson Perry is one of Britain’s foremost contemporary artists. His primary medium is pottery, with drawn, incised and transfer-printed decoration. His imagery is a potent combination of contemporary urban themes, often autobiographical, with social and political critiques, but often represented in the idiom of historic ceramic design or with historic decorative styles and motifs.

This printed tea-towel was made for sale alongside his exhibition The Charms of Lincolnshire at the Victoria Miro Gallery, London, 2006 (first shown at The Collection). For this show Perry selected historic artefacts – everything from toys, costume and bibles to game-keepers’ traps, coffin plates and a wooden hearse, from various museums of rural life and social history in Lincolnshire. These were shown in conjunction with his own works – including dolls, vases, plates, and an embroidered sampler, all of which were designed to blend together in what was described as “a three-dimensional narrative poem” exploring death, childhood, religion, folk art, hunting and the feminine (a theme of particular interest to Perry, who is a transvestite). Many of the objects in the exhibition are depicted in the image on the tea-towel, with Lincoln Cathedral in the background and with various phallic fungi prominent in the foreground. The title of the exhibition evokes a bucolic cliché of National Trust England; Perry chose to design a tea-towel as a reference to the ubiquitous souvenir tea-towels found in every NT and country-house gift shop.

DigiTickets
How can we help?

I'm having trouble with my purchase!

Tell me more about DigiTickets!

We also collect analytics data to help make improvements by measuring how the website is used. If you are happy to be included in this data please agree below.